The Parody Wiki
Register
Don't have an account?
Sign In
Advertisement
in: Countries, North America, The Carribean,
and 2 more

Trinidad and Tobago, officially the Republic of Trinidad and Tobago, is the southernmost island country in the Caribbean and is known for its fossil-fuel wealth. Consisting of the main islands Trinidad and Tobago, and numerous much smaller islands, it is situated 130 kilometers (81 miles) south of Grenada and 11 kilometers (6.8 miles) off the coast of northeastern Venezuela. It shares maritime boundaries with Barbados to the northeast, Grenada to the northwest and Venezuela to the south and west. The island of Trinidad was inhabited for centuries by native Amerindian peoples before becoming a colony in the Spanish Empire, following the arrival of Christopher Columbus in 1498. Spanish governor José María Chacón surrendered the island to a British fleet under the command of Sir Ralph Abercromby in 1797. During the same period, the island of Tobago changed hands among Spanish, British, French, Dutch and Courlander colonists more times than any other island in the Caribbean. Trinidad and Tobago were ceded to Britain in 1802 under the Treaty of Amiens as separate states and unified in 1889. Trinidad and Tobago obtained independence in 1962, becoming a republic in 1976. Trinidad and Tobago has the third highest GDP per capita based on purchasing power parity (PPP) in the Americas after the United States and Canada. It is recognized by the World Bank as a high-income economy. Unlike most Caribbean nations and territories, which rely heavily on tourism, the Trinidadian economy is primarily industrial with an emphasis on petroleum and petrochemicals; much of the nation's wealth is derived from its large reserves of oil and natural gas. Trinidad and Tobago is well known for its African and Indian cultures, reflected in its large and famous Carnival, Diwali, and Hosay celebrations, as well being the birthplace of steelpan, the limbo, and music styles such as calypso, soca, rapso, parang, chutney, and chutney soca. 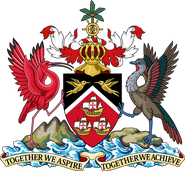