Start a Wiki
She is a character from "My Little Pony: Friendship is Magic".

She is Captain Hook's lieutenant

Trixie played Fate of The Present in Twicules

She is a fate

She is a Red Echidna

She is Jafar's new partner

She is a snake 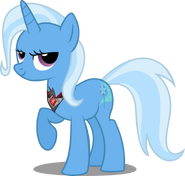 Trixie (Human)
Add a photo to this gallery
Retrieved from "https://parody.fandom.com/wiki/Trixie?oldid=1972509"
Community content is available under CC-BY-SA unless otherwise noted.