The Parody Wiki
Register
Don't have an account?
Sign In
Advertisement
in: Characters, Major Characters, Humans,
and 69 more

"Truman" is Helen's neighbor. He's a couple years younger than Helen, and is often hanging around Martha's house to escape from all the babies at his house. His mom runs a home day care center. Truman is a really smart kid, and he's also a little fussy and fearful (whatever you do, don't tell him there's a bug in the room!). But mostly, he's curious and excited about knowledge." -description from PBS website-->

Truman Cedric Oatley (born January 15, 2001) is Helen's neighbor, and younger than the rest of the gang. He is a main character in the TV Show, Martha Speaks.

It is an possibility he got his middle name from his actor, Cedric Payne.

Truman has entomophobia, which means he is afraid of bugs and the outdoors. He is smart, and excited about learning new things.  He likes listening and watching the weather channel, playing Chess and Opera.  He also took piano lessons which he has developed a strong dexterity.  He also won the word contest and junior bowling tournament.  He needed to learn how to catch a ball for his class baseball game but forgot how to throw a ball. He also hates babies.  He is a big fan Courageous Collie Carlo and knows all the episodes as well. 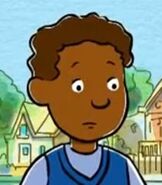