An unusual and unique reptile found only in New Zealand, the tuatara (Sphenodon punctatus) has been dubbed a ‘living fossil’ as it is the only surviving member of an ancient group of reptiles that flourished during the time of the dinosaurs. The name of this group, Rhynchocephalia, means ‘beak heads’, referring to the overhanging upper jaw of these species. The tuatara is a medium-sized reptile and superficially resembles a lizard in appearance. It has a large head, a stout body, powerful limbs with sharp claws, and a thick tail, but it differs from lizards in details of its internal anatomy. Unlike lizards, the tuatara also has unusual dentition, with a single row of teeth in the lower jaw which fits into a groove between two rows of teeth in the upper jaw. The teeth of this species are not set in sockets, instead being simple serrations in the jaw bone. The tuatara has no external ear opening, although it is still able to hear. The body of the tuatara varies from olive-green to grey, blackish-brown or pinkish, and is often marked with pale speckles which give this reptile its scientific name punctatus, meaning ‘speckled’ or ‘spotted’. The speckles tend to be brighter in juveniles and in adults which have recently shed their skin. Newly hatched tuatara are brownish-pink or grey, sometimes with light patches on the body and tail. The name ‘tuatara’ comes from New Zealand Maori words meaning ‘peaks on the back’, referring to the conspicuous folds of skin and spiny crest along this species’ neck, back and tail. The spines are usually white and are most prominent in males, being raised during territorial or courtship displays. The adult male tuatara can also be distinguished from the adult female by its larger size, more triangular head and less pear-shaped abdomen. A further unusual feature of the tuatara is that it possesses a ‘third eye’, also known as a parietal or pineal eye, which is located centrally on top of the head, beneath the skin. This ‘eye’ has a lens and retina, but its exact function is unclear. It is sensitive to light but is not thought to form images, instead potentially being involved in regulating the tuatara’s exposure to the sun. Although the parietal eye is not unique to the tuatara, it is better developed in this species than in any other animal. The tuatara has been reported to sometimes produce a harsh croaking sound, similar to the call of a frog. Tuatara were once found across the New Zealand mainland, but are now almost exclusively confined to offshore islands. Tuatara grow and reproduce slowly, and may potentially live for up to 100 years or more. 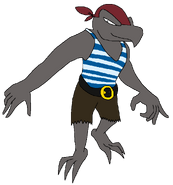 Add a photo to this gallery
Retrieved from "https://parody.fandom.com/wiki/Tuatara?oldid=2372536"
Community content is available under CC-BY-SA unless otherwise noted.