The Parody Wiki
Register
Don't have an account?
Sign In
Advertisement
in: Characters, Animals, European Animals,
and 15 more

The tundra wolf (Canis lupus albus), also known as the Turukhan wolf, is a subspecies of grey wolf native to Eurasia's tundra and forest-tundra zones from Finland to the Kamchatka Peninsula. It was first described in 1792 by Robert Kerr, who described it as living around the Yenisei, and of having a highly valued pelt. It is a large subspecies, with adult males measuring 118–137 cm (46.5–54 in) in body length, and females 112–136 cm (44–53.5 in). Although often written to be larger than C. l. lupus, this is untrue, as heavier members of the latter subspecies have been recorded. Average weight is 40–49 kg (88–108 lb) for males and 36.6–41 kg (81–90 lb) for females. The highest weight recorded among 500 wolves caught in the Taymyr Peninsula and the Kanin Peninsula during 1951-1961 was from an old male killed on the Taymyr at the north of the Dudypta River weighing 52 kg (115 lb). The fur is very long, dense, fluffy and soft, and is usually light and grey in colour. The lower fur is lead-grey and the upper fur is reddish-grey. 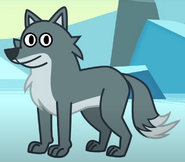 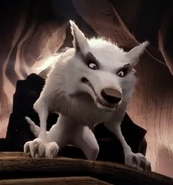