The Parody Wiki
Register
Don't have an account?
Sign In
Advertisement
in: Main Characters, Pink Characters, Heroes,
and 59 more

Uniqua is a unique creature known as a Uniqua, and is the main protagonist of the series.

She is a one-of-a-kind, unique and intersting creature, hence her name. The series uses the name "Uniqua" for both the character and her species. Uniqua is voiced by LaShawn Tináh Jefferies throughout the entire series. Her singing voice is provided by Jamia Simone Nash in seasons one through three and by Avion Baker in the fourth season. 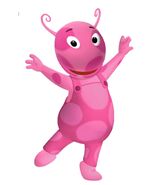