The Parody Wiki
Register
Don't have an account?
Sign In
Advertisement
in: 2007 Version, Characters, Main Characters,
and 16 more

Ursula (George of the Jungle)

Being Magnolia/Ursula's chew toy, Bad luck to her, Sloths (currently), her or her friends in danger

Ursula Scott is one of the major characters of Season 2's George of the Jungle revival series. She is name changed to Magnolia from Ursula for unknown reasons. In Season 2, Magnolia shows she is a jungle scientist, going to the jungle to find something interesting to win a noble prize.

Magnolia is a jungle scientist who is on a research trip to discover the rarest of animals to win a Nobel Prize, but her obliviousness to bad ideas often lands her in trouble.

Like season 1, Magnolia has brown hair and light brown skin. She has green eyes and red lipstick. She also wears a blue t-shirt, tan shorts, and white and red sneakers.

She played Sadness in Cartoonside Out (Cartoon Network Style)

Ursula Stanhope in George of the Jungle (1997 Film) 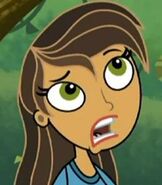