The Parody Wiki
Register
Don't have an account?
Sign In
Advertisement
in: Characters, Tangled Characters, Villains,
and 37 more

Varian is a major character and former villain in Tangled: The Series. He started out as Rapunzel's friend and a somewhat clumsy but well-intended inventor, but turned into the first season's antagonist out of furry at the end of the episode "Queen For a Day", when Rapunzel unintentionally has to break a promise she made to help him.

In Season 3's "Rapunzel's Return", however, he and Rapunzel eventually reconcile their friendship and free his father Quirin from the amber.

Varian will play Eddie in The Jack Skellington Picture Show

Varian played as John Smith in Wendyhontas (Childhood Style) and Wendyhontas 2: Journey to a New World

Varian played as Abis Mal in Astroladdin II: The Return of Captain Hook

Varian will play as Hercules in Varian (Hercules)

Varian will play as Ted Shackleford in Curious Tommy

He is a tour guide and a museum employee, who befriends with an infant and was determined to save the museum.

Varian will play as a male version of Melody in The Little Peddler II: Return to the Sea (Swap Edition)

Varian will play as Ben Tennyson in Varian 10 and Varian 10: Secret of the Omnitrix 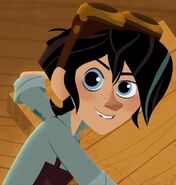 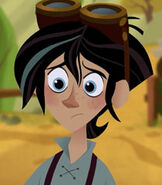 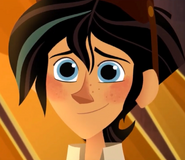 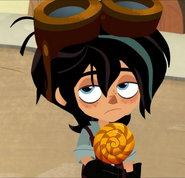 Varian revealing his true and new colors to Rapunzel.