Venom, or the Venom Symbiote, is an alias used by several fictional characters appearing in American comic books published by Marvel Comics, commonly in association with Spider-Man. Venom made his first appearance in The Amazing Spider-Man #300 (May 1988). Venom was originally conceived as a supervillain, but has since become more of an antihero. Venom is a Symbiote, a sentient alien, with a gooey, almost liquid-like form. As with real-world symbiotes, it requires a host, usually human, to bond with for its survival. After bonding, the Symbiote endows its enhanced powers upon the host. When the Venom Symbiote bonds with a human, that new dual-life form refers to itself as "Venom".

He is the devil and ruler of the Underworld

He is the evil pirate captain

He is a super-villain

Venom played Fidget the Bat in The Great Pegasus Detective

He is a bat

He is a Heylin warrior

He is a governor of virginia

He is a grasshopper

He is the prince of the Southern Isles

He is a piranha

Venom played Dr. Facilier in The Xiaolin Princess and The Pegasus

He is a voodoo bokor

He is a commander

He is a mirror with the mask like face

Venom (along with The Sinister Six) played Percival C. McLeach in The Rescuers: Down Under (Twilight'sSpaceStar17's Human Style)

He is a Monkey

Venom played Gaston in Beauty and The Dragon

He is the hero of the town

Venom played Mickey Mouse in Venom and The Beanstalk

He is the emperor of the Galactic Empire

Venom played Discord in My Little Xiaolin: Friendship is Magic

He is the god of chaos and disharmony

He is a butler

He is the gorilla hunter

He is a virus

He is a super-villain

He is a peacock

Venom played Mr. Chairman in Xiaolin Tunes: Back in Action

He is a cyborg

Venom played Jenner in The Secret of NIMH (Twilight'sSpaceStar17's Style)

He is a demon and master of evil

Venom played The Coachman in Skunocchio

He is a teddy bear who smells strawberry

He is a toad

Venom played Vincent in Over the Xiaolin Hedge

He is a grizzly bear

Venom played Sauron in The Lord of the Xiaolins

He is a leopard

He is the ugly prototype

He is a shape shifting boss

He wants to blow up the Ponyville's area

He is Wonder Woman and Wonder Girl's arch nemesis

He is a giant ape

Venom played The Scientist in The Phoenix Crystal 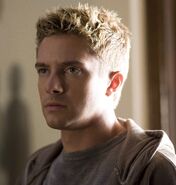 Prince Hans
(Disney•Pixar's Spider Man 3 (2007))
Add a photo to this gallery
Retrieved from "https://parody.fandom.com/wiki/Venom?oldid=2032820"
Community content is available under CC-BY-SA unless otherwise noted.