Vlad Masters in the Main Villian of Danny Phantom

He was once roommate/best friend of Jack Fenton (Danny's father) in Wisconsin State University, and fell in love with a young woman named Maddie.

Unfortunately, his chance with Maddie came to a crashing end when the ghost portal, which Jack Fenton was working on, overpowered and exploded. Vlad's self pity was the only factor preventing him from reconnecting with Maddie. Ultimately though Vlad never had a chance with Maddie as she never truly loved him as proven in the alternate timeline "Masters of All Time."  After his injury, Vlad was hospitalized with ecto-acne for several years, which destroyed his social life - and gave him ghost powers.

Since that accident, Vlad grew bitter over the last 20 years. 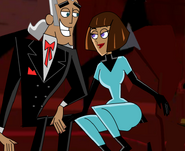 In the new timeline he only spends days in the hospital and is married to new college sweetheart, Carolyn Maddie Wells who is Maddie's doppleganger from a parallel universe. Despite this new timeline he still remembers the old timeline and gets into fights with Danny from time to time.  When he gets in over his head Carolyn comes to the rescue.  He does do noteworthy things but still has occasional villainous moments which Carolyn at least, has come to accept.

Retrieved from "https://parody.fandom.com/wiki/Vlad_Masters/Vlad_Plasmus?oldid=1970699"
Community content is available under CC-BY-SA unless otherwise noted.