The Parody Wiki
Register
Don't have an account?
Sign In
Advertisement
in: Characters, Animals, Australian Animals,
and 8 more

Cyclorana (Say it: sigh-KLOE-RANN-uh), or water-holding frogs, is a genus of frogs in the family Hylidae (tree frogs), whose members are found in most of Australia. It was formerly considered a separate genus, but reclassified following a major revision by Frost et al. in 2006. Although classified as tree frogs, this genus is entirely terrestrial and lacks toe pads which their arboreal relatives use for climbing. They are classified as tree frogs because of their similarity with the other members of the genus Litoria in terms of skeletal structure and physical resemblance of the tadpoles. 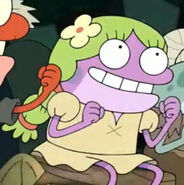