The Parody Wiki
Register
Don't have an account?
Sign In
Advertisement
in: Characters, Animals, Arachnids,
and 18 more

Nepidae is a family of exclusively aquatic Heteropteran insects in the order Hemiptera. They are commonly called water scorpions for their superficial resemblance to scorpions, due to their raptorial forelegs and the presence of a long slender process at the posterior end of the abdomen, resembling a tail. There are 14 genera in the family, in two subfamilies, Nepinae and Ranatrinae. Members of the genus Ranatra, the most widespread and speciose genus, are sometimes called needle bugs or water stick insects as they are more slender than Nepa. 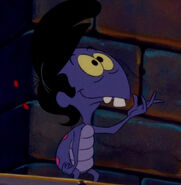