The Parody Wiki
Register
Don't have an account?
Sign In
Advertisement
in: Females, Female Characters, Characters,
and 35 more

Webby Vanderquack is the granddaughter of Betina Beakley. It is unknown what happened to Webby's own parents, but Mrs. Beakley seems to be her legal guardian. At the time of Mrs. Beakley's interview for the position of Scrooge's maid, cook and the Nephews' nanny, Webby and Betina were homeless. She agreed to work only for food and shelter for the both of them--a deal Scrooge couldn't refuse. Since then, both have been adopted into the Duck's extended family. And Webby earned a place in Scrooge's heart, evident by him telling her to call him "Uncle Scrooge" even though they're not related.

Webby makes her first appearance in the DuckTales episode "Three Ducks of the Condor" (part three of the pilot movie "Treasure of the Golden Suns"). After which, she made regular appearances throughout the series, playing the role of Scrooge's adopted niece. Some episodes even focused on her, such as "Attack of the Fifty-Foot Webby" and "The Good Muddahs".

In "Attack of the Fifty-Foot Webby", when Scrooge takes the children to the jungle to find a rare animal, Webby comes in contact with some water that causes her to grow to a massive size.

In "The Good Muddahs", Webby is kidnapped and held for ransom by the the Beagle Boys' cousins, the Beagle Babes. During the time that they're holding her, she befriends them.

Webby is set to appear in the reboot series as a major character. This incarnation of Webby is considerably older than the original, and is portrayed as an enthusiastic adventure fan and Clan McDuck historian who idolizes Donald Duck as "one of the greatest adventurers of all time".

DuckTales the Movie: Treasure of the Lost Lamp

Webby in DuckTales the Movie: Treasure of the Lost Lamp In the DuckTales movie, Scrooge takes Webby, the boys and Launchpad on a trip to find the Treasure of Collie Baba, unaware that the evil Merlock is also looking for it. When they find it, she spots an oil lamp and asks Scrooge if she can have it, because it looks like a teapot. Not being very valuable, he says 'yes'. After having the treasure stolen by Merlock and barely escaping, they return to Duckburg empty handed.

Once home, Webby begins to polish her "teapot". As soon as she wipes it with a cloth, a Genie pops out. He befriends Webby, Huey Dewey and Louie and grants several wishes for them. Her first wish, for a baby elephant, almost reveals the Genie's presence. Finally, Webby's wish that her toys would come to life reveals his presence to Scrooge. Once Gene the Genie is revealed, Scrooge wishes for the Treasure of Collie Baba and takes the lamp to the Archaeological Society Ball, where he plans to tell of his discovery. Here, Dijon (Merlock's sidekick) gets a hold of the lamp and wishes for Scrooge's fortune. After he's arrested for trespassing on "his" own property, Webby and the rest of Scrooge's friends chip in to bail him out of jail. After which, she assists in retrieving the lamp and saving the day.

Webby appears in the opening theme of Raw Toonage, but does not appear in any of the episodes.

Webby plays Marie in The AristoDucks. 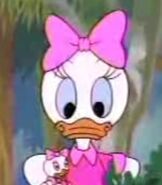 Webby Vanderquack in the TV Series (1987) 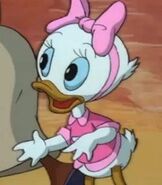 Webby Vanderquack in DuckTales the Movie Treasure of the Lost Lamp 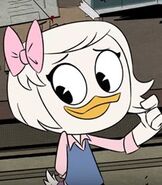 Webby Vanderquack in the TV Series (2017)

Webby with Huey, Dewey and Louie 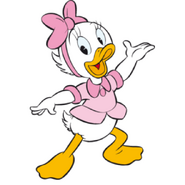 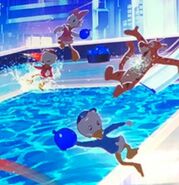