Weird Monster Thingy has a long reddish-orange hair with a light pink bowtie, a small white diamond-star and a yellow hat. They have four eyes. One on the top has blue irises and wears glasses. Underneath, the eyes doesn't have irises. They have a bright pointy nose, two mouths and a large ear on the left. They wear a ripped blue shirt with a thick yellow belt that combines with a cardigan and a dark pink pocket with a lime triangular-shaped tissue. One on the right has a dark blue arm-sleeve and one on the left does not have a sleeve. Instead they have a purple armbands with a letter "M" in it. They have a stick near the left shoulder and has a ripped red skirt with five white thin lines and a large blowhole. Their skin is dark green and they have large tentacles.

Weird Monster Thingy is a scary, horrid, smart, bratty and paranoid fusion monster who dislikes people and likes eating animals for dinner. They are very hostile and very strong. 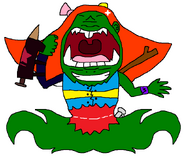 Weird Monster Thingy holding a Breaking Point
Add a photo to this gallery
Retrieved from "https://parody.fandom.com/wiki/Weird_Monster_Thingy?oldid=1204693"
Community content is available under CC-BY-SA unless otherwise noted.