Wendy Testaburger is a South Park character, the show's main girl.  She is the only main character who is female, and is the girlfriend/love interest of Stan Marsh.  She was 8 years old at the beginning of the series, but is currently 10 years old.  She began as a sweet but unpredictable tomboy, but became more girly and mature as the show went on.  She was voiced by Mary Kay Bergman at 8 years old, Eliza Jane Schneider at 9 years old, and April Stewart at 10 years old. 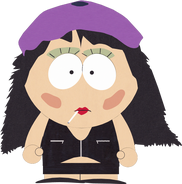 Wendy in her alter-ego, Call Girl.
Community content is available under CC-BY-SA unless otherwise noted.
Advertisement