The Parody Wiki
Register
Don't have an account?
Sign In
Advertisement
in: Characters, Creatures, Mythical Creatures,
and 11 more

The weretiger is a half human and half tiger beast. It has the intelligence of a human and the strength and speed of a tiger. The tiger part of this beast would give it thick claws and sharp teeth, so it could slash its victims and deliver devastating bites. These mythical hybrid beasts would prowl the jungles of Asia looking for human prey. At night they would attack to satisfy their hunger for fresh blood. According to legend there are several ways by which a person can be transformed into this nasty feline monster. Some believed that only the people who had led a bad life and only asked for forgiveness as they were dying would transform into this tiger-like monster. In Malaysia, people were said to be able to choose to become one of these beasts. Some did it to get revenge and others simply because they craved the power, strength and violence. A person had to pay a sorcerer to perform the ritual of turning a human into this form of werecat. Some legends talk of reciting a curse while wearing a tiger costume. The most gruesome way to become this werecat beast is to steal the innards of a dead person, boil them and drink the broth. In Asia, people who were killed by tigers were said to transform into ghosts. These ghosts would spend their time making sure tigers killed more and more people. They would also change some humans into these werebeasts to strengthen their cause. 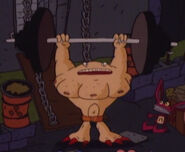