AlexBrattenRockz's Spoof of "What Have We Learned, Charlie Brown?".

The special opens with Benny back home, assembling a photo album of pictures taken from the trip. His younger sister, D.W., approaches and asks him how it went. From there, it is shown in a flashback:

As they begin to head back from the chateau to the train station for the return trip to London (where they would return to America by plane), their problematic rental car (a Citroen 2CV) slows their progress, before breaking down entirely in a small French town. Renting another one from Amelie the France (who immediately accepts their offer after realizing Frosty is, in fact, a World War I Flying Ace) they soon become lost and camp at a nearby beach for the night. Leo, however, wakes up shortly before daybreak and walks along the beach, realizing they are at Omaha Beach.

Leo then tells of the battle of D-Day, leading the group to the nearby cemetery for all of the American soldiers. The voice of General Dwight D. Eisenhower is also heard, reminiscing about the experiences of the battle. Archival news footage is also used, in some cases with the characters inserted through rotoscoping.

While proceeding up north, they head towards Ypres, which Linus recognized as the site of a series of battles during World War I. They arrive at a field of red poppies, which grew throughout the wastelands of battles fought during the war, and which serves as a marker for the Ypres battle site. Leo then recites the poem In Flanders Fields, after directing the group to the British field dressing station where McCrae was inspired to write the poem.

They come away realizing what the impact of the wars were, and how important the sacrifice of the soldiers was. Standing among the field of red poppies, Leo then turns and asks, "What have we learned, Benny the Bull?". The scene flashes back to him and D.W.. She then tells him that he is pasting the pictures upside down. 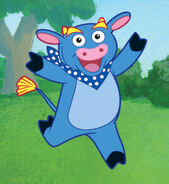 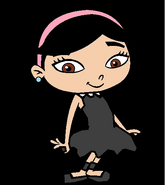 Add a photo to this gallery
Retrieved from "https://parody.fandom.com/wiki/What_Have_We_Learned,_Benny_the_Bull%3F?oldid=1558878"
Community content is available under CC-BY-SA unless otherwise noted.