The Parody Wiki
Register
Don't have an account?
Sign In
Advertisement
in: Characters, Animals, Asian Animals,
and 76 more

A beautiful and captivating primate, the white-handed gibbon or lar gibbon (Hylobates lar) is a master of agility. As true brachiators, gibbons are much admired for their remarkably fast, yet seemingly effortless, suspensory motion through the trees. The white-handed gibbon possesses the long arms and hands typical of gibbon species, which are perfectly suited to this pendulous swinging from branch to branch. Despite lacking a tail, the gibbon’s sense of balance is nevertheless acute, and it can even be found walking on its hind legs along branches high above the ground, characteristically raising its arms above its head for balance. Individuals vary in color from dark brown or black to red-buff and pale fawn, but always with a white fringe framing the black face and white upper sides of the hands and feet. Males and females are very similar in size and can have all color variants. Its unmistakable call, a loud whooping sound, is enhanced by a sound-amplifying throat sac and can be heard from a great distance. 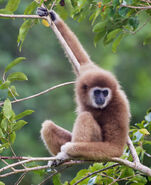 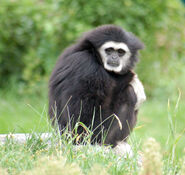 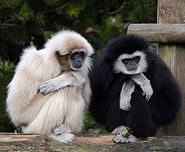 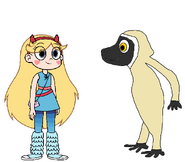 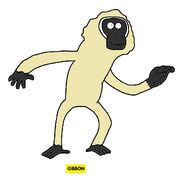 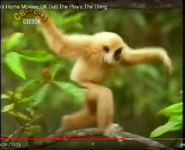