The Parody Wiki
Register
Don't have an account?
Sign In
Advertisement
in: Characters, Animals, South American Animals,
and 43 more

The white-nosed coati (Nasua narica), also known as the coatimundi, is a species of coati and a member of the family Procyonidae. Local Spanish names for the species include pizote, antoon, and tejón, depending upon the region. It weighs about 4–6 kg (8.8–13.2 lb). However, males are much larger than females: small females can weigh as little as 2.5 kg (5.5 lb), while large males can weigh as much as 12.2 kg (27 lb). On average, the nose-to-tail length of the species is about 110 cm (3.6 ft) with about half of that being the tail length. White-nosed coatis inhabit wooded areas (dry and moist forests) of the Americas. They are found at any altitude from sea level to 3,000 m (9,800 ft), and from as far north as southeastern Arizona and New Mexico, through Mexico and Central America, to far northwestern Colombia (Gulf of Urabá region, near Colombian border with Panama). There has been considerable confusion over its southern range limit, but specimen records from most of Colombia (only exception is far northwest) and Ecuador are all South American coatis. 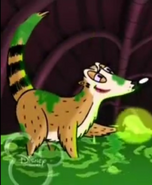