The Parody Wiki
Register
Don't have an account?
Sign In
Advertisement
in: Characters, Animals, Doves,
and 26 more

A release dove, also called a white pigeon, is a domestic rock dove (Columba livia domestica) bred for small size and white coloration that is released during events, such as public ceremonies, weddings and funerals. Most white doves are domesticated barbary doves (Streptopelia risoria). Albinism or other genetic anomalies that produce an entirely white dove occur very rarely in the wild since an all-white coloration would make these birds stand out in their natural habitats, leaving them highly vulnerable to predators. Not all release doves are not rock doves and most breeders of doves for various users don't release their birds. 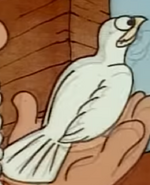