The Parody Wiki
Register
Don't have an account?
Sign In
Advertisement
in: Characters, Main Characters, Heroes,
and 39 more

Whyatt Beanstalk is one of the main characters of Super Why! and also the leader of the Super Readers, a group of storybook children who save the day by solving problems and diving into the storybooks in hopes of creating a happy ending while solving their own problems at the end of every adventure.

Whyatt is the natural born leader of the group who everyone turns to in the times of crisis or need, but even he is bound to make a couple of mistakes along the way.

Whyatt is a friendly and helpful boy, against all odds he'll always try to turn around any bad situation he may be faced with. He shows responsible, leaderly skills and is very smart for someone his age. Though when its his own problems he may take need a few minutes to determine how to fix it exactly but he can quickly tell when he messed up. Compared to the others, Whyatt seems to be the most calm of them and is rarely every upset or angry. He is honest with his true feelings and also brave and heroic. Whyatt's friends are very important and dear to him too! He cares for them deeply and will worry for them if they have a problem. Either by giving them support or by giving them a hug when the times call for it. Whyatt will do whatever he can to encourage them or make them feel better, being very empathetic to others feelings. When his friend is sad, he'll be sad too.

Whyatt is a young boy with olive colored skin and short brown hair that seems to be about ear length with his bangs pulled to the sides of his head and a single two-part tuft on the right side of his head, where his hair seems to be parted. His eyes are bright blue. Normally Whyatt wears a dark blue polo shirt with white markings and green sleeves, along with khaki jeans/pants, and tennis shoes.

At the beach, Whyatt wears a blue, powder blue, and white shirt with a green pair of swim trunks with yellow and blue lining around the top and a white string. His shoes resemble lilac-blue crocs with green strappy pieces, and he wears a blue fishing/swimming hat with a green band with tiny white question marks going around.

For Halloween, Whyatt wore an iron mask and a short red cape and dressed up as a Knight. He also carried a silver shield.

Once Whyatt wore a Pirates Hat

In the syndicated version, Whyatt wore a green v-neck t-shirt and black shorts.

Whyatt turns into "Super Why", a typical super hero with the power to Read. Using both his reading abilities and his special why-writer, Super Why can always save the day! A why-writer is used by switching words around, taking out the bad words and putting in the good words. Super Why can also use it to highlight the words he is going to read. Just slightly does Whyatt's voice change while he is Super Why, but in the syndicated version, his voice doesn't change. He wears a green leotard/body suit with blue coloring between his elbows to wrist and underneath his gold belt. His cape is the same shade of blue and he also has on a pair of multi-blue colored turbo sneakers small lightning bolts on the sides that allow him to fly just like a real Super Hero. Over his eyes is a green eye mask. In the syndicated version, sparkles were added to his costume to match Princess Presto's costume, except for his mask which stays the same. When the super readers powers were upgraded to ZEO Super Reading power, Super Why's shoes became boots of the same shade And his cape became gold, he also gets gold gloves.

Super Why's Why Flyer is deep blue in color and resembles a typical plane with engines on the top. It has bright green lining and markings and a yellow underside. There is also a glass part in front of Super Why. For safety when riding in it, Super Why puts on a dark blue helmet. The question mark trail behind his flyer is green.

Whyatt comes from a family of three children and he is the middle child and youngest boy.

Mrs. Beanstalk: Whyatt's mother. She is a lovely book author who works with her husband. She also does a lot of the house work and tends to Baby Joy. She loves her children and has shown to be very smart. She supports Whyatt with everything he does.

Mr. Beanstalk: Whyatt's father who works with Mrs. Beanstalk. He works on the books illustrations. Mr. Beanstalk isn't seen as often as Mrs. Beanstalk, and the males in the family seem to have inherited his looks.

Jack Beanstalk: The hero from "Jack and the Beanstalk". Whyatt looks up to his brother and cares for him dearly. Whenever Jack gets angry or upset with him, it hurts Whyatt a lot. He was very saddened when Jack left for college until finding out that he could go visit his brother sometimes while away.

Near the end of season 1, after Jack leaves for college he was replaced by a "twin" named Ken Beanstalk.

Goldilocks and the 3 Bears: When showing Jack's room to the viewer Whyatt accidentally made a mess of his bedroom and made his older brother angry with him. After helping Goldilocks he realized that you should clean up after making a mess.

The Boy Who Cried Wolf: Whyatt's entire family refused to believe him when he said Joy spoke. Near the end of the episode he managed to figure out how he could make them believe him.

The Elves and the Shoemaker: Whyatt gets a secret admirer!

Little Bo Peep: Whyatt's pet lizard goes missing and at the end of the episode realizes he left a few clues to his whereabouts.

Whyatt's family is being very secretive and he has no clue why! He then learns it was because they were planning a surprise birthday for him.

Goldilocks and the 3 Bears: The Mystery: Whyatt is accused of breaking the strings on Jack's guitar but he knows he's innocent. So he then goes on to prove it.

Tiddalick the Frog: Whyatt is told from his mother that he keeps wasting water but he doesn't know how to fix it.

The Foolish Wishes: Whyatt gets to buy a new toy but with so many choices he has no clue what to pick.

Pinocchio: Whyatt feels guilty after he tells a lie and realizes that its important to tell the truth.

Twas The Night Before Christmas: Whyatt wished to learn more about Santa

The Boy Who Drew Cats: When Jack got sick Whyatt wished to draw him a picture in hopes of making him feel better but he didn't know what to draw.

Muddled Up Fairytales: When everybody else is too busy for him, Whyatt has no clue what to do by himself.

The Prince and The Pauper: Both Whyatt and Princess Pea are unhappy in their current homes but learn that no matter what, home is where the heart is.

The Cookbook: Whyatt wants to bake Joy a special cake but had no idea how to make one.

The Big Game: Whyatt wants to improve his baseball skills but keeps missing the ball. He learns that in order to play better he must practice.

The Story Of The Tooth Fairy: Whyatt loses his first tooth but wishes to keep it. So the group go search for the tooth fairy to ask how to do this.

The City Mouse and The Country Mouse: Whyatt becomes very sad when Jack is leaving for college. But learns that he can go to visit his brother and his brother will come to see them.

Woofster Finds a Home: Whyatt heads to a pet adoption and gets an adorable puppy. Along the way the puppy reveals he has a story of his own!

King Eddie Who Loved Spaghetti: Whyatt learns that the food on his plate is unhealthy.

Baby Dino's Big Discovery: Whyatt tries to determine what dinosaur his toy is when he plays ith the others.

The Great Robot Race: Whyatt and Puppy want to win the Porridge race but puppy struggles but they soon learn that they can invent some new ways to aid them

Around the World Adventure: Whyatt meets a girl older then him at school who comes from another part of the world.

The Mixed Up Story: Baby Joy shakes the book A Day With Farmer Fred and words got mixed up.

The Cowgirl Mystery: Whyatt's game board is Missing 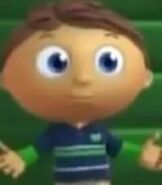 Whyatt Beanstalk in Jack and the Beanstalk 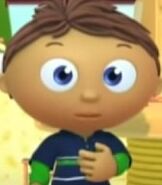 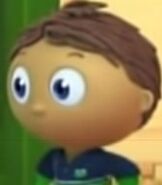 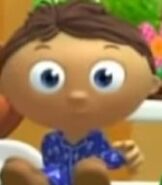 Whyatt Beanstalk in The Story of the Tooth Fairy
Community content is available under CC-BY-SA unless otherwise noted.
Advertisement