The Parody Wiki
Register
Don't have an account?
Sign In
Advertisement
in: Characters, Super Mario Characters, Male Characters,
and 17 more

Wingo is the main antagonist and final boss of the 2014 video game Captain Toad: Treasure Tracker, a spin-off/prequel of Super Mario 3D World. He is a massive magical crow with a white turban, red eyelashes and pupils, and a Power Star necklace. He is the archenemy of Captain Toad.

As Captain Toad and Toadette obtain a Power Star, they notice feathers falling from the sky. Wingo appears and grabs the star, claiming it for himself. Captain Toad is knocked over by the assault, while Toadette grabs on to the star to attempt to reclaim it. Wingo, however, makes off with the star, kidnapping Toadette in the process.

Wingo is not seen again until Captain Toad obtains the Power Star from the stage "Blizzard on the Star Express", where Wingo grabs both the star and Captain Toad and takes them to his fortress to engage the Captain in a showdown. Captain Toad eventually defeats Wingo by throwing his summoned magic turnips back at him, one of which is shoved into his mouth and accidentally swallowed, fattening Wingo enough to fall out of the sky. Toadette is rescued by holding on to the Power Star and the Toads happily continue treasure hunting.

Wingo is revealed to be alive, returning to steal the Toads' treasure again and ends up capturing Captain Toad instead. Unlike in Episode 1, Wingo does not face Toadette when she arrives at his tower, but waits until she and Captain Toad reunite and grab the Power Star at the end of the level. He abducts Toadette once again and blows Captain Toad off the tower.

The Captain awakes in a dark cave, where he finds another Power Star snatched away by Wingo. Meanwhile, Toadette escapes Wingo and goes off to reunite with Captain Toad, though she is captured again soon after. Wingo then takes her to his fortress, while Captain Toad arrives. After a final fight, Wingo is truly defeated, and falls from his tower again. During the end credits, he is seen trying to support himself as he falls. Whether he survived the fall or not is uncertain.

Each battle of Wingo follows the same routine; he magically teleports around his tower in a clockwise formation, flapping his wings to create gusts of strong winds to push Captain Toad off the tower. Turnips can be thrown at him to interrupt the flaps. Captain Toad can take shelter behind a wall or obstacle to avoid Wingo's gusts. Once Toad makes it to the top of the tower, phase two begins. Wingo again will flap his wings, but Captain Toad can resist it by moving in the opposite direction. Occasionally, he will let out a squawk, and magically spawns three giant turnips to crush Captain Toad. The turnips that miss will land in the pile of gold, allowing Captain Toad to pluck them out and throw them back at Wingo. Only three hits from the turnips will defeat the greedy crow.

The second battle fights similarly to the first one, although lightning will strike the arena, creating small electrical circles in the portion they struck and will vanish after a few seconds. Also, lightning bolts take out the barriers on the edges of the tower before the fight, preventing them from saving Captain Toad from falling off. Once again, three turnip hits are all to defeat Wingo. 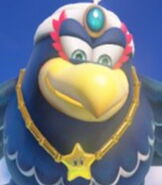