The Parody Wiki
Register
Don't have an account?
Sign In
Advertisement
in: Characters, Animals, North American Animals,
and 42 more

A brightly coloured and distinctively patterned bird, the wood duck (Aix sponsa), is considered to be one of the most stunning of all waterfowl. Its scientific name, Aix sponsa, aptly translates as “waterbird in bridal dress”, referring to the flamboyant breeding plumage of the adult male. A relatively small duck, the wood duck has a crested head, a thin neck, short, broad wings and a large, rectangular tail. During the breeding season, the colourful male is blackish above, with a bronze, green and purple iridescence. It has a purplish neck and breast marked with white triangular spots, and the lower breast and belly are white. The flanks of the male wood duck are buffy yellow, bordered in front by broad black and white vertical lines, and above and to the rear by finer black and white crescents . The male wood duck’s wings are largely metallic blue, green and black above, with a few white markings, and dark brown below. The tail is black with a bronze sheen. The feathers on the side of the rump are elongated, and are reddish-violet with orange stripes. The head and long, shaggy crest of the male wood duck are mainly black with a green, blue and purple iridescence. The face is ornately marked with thin white lines from the top of the beak, over the eye and through the crest, and from behind the eye through the base of the crest. The chin and throat are white, with white, finger-like markings extending onto the cheek and neck. This attractive patterning is further enhanced by the bright red eye and reddish beak, which has a black tip, a white patch on the front of the upper mandible, and a bright yellow line at the base. The legs and feet of the male wood duck are orange-yellow, with dusky webbing. The female wood duck is much less brightly coloured than the male, being largely olive-brown to greyish, with a purple, green or bronze sheen on the upperparts, white mottling on the breast and sides, and a white belly. Like the male, the female wood duck has a shaggy crest, but the head and crest are mainly dark greyish, with a green and purple gloss, a narrow white line around the base of the beak, a white patch around the eye, and a white chin and throat. The female has a dark grey beak, dark brown eyes, and yellowish-grey legs and feet, with dark webbing. In late summer, the male wood duck briefly moults into ‘eclipse plumage’ while the flight feathers are replaced. During this time, the male more closely resembles the female, but retains the red eye, white cheek lines and colourful beak. After breeding, the female becomes duller and browner, with a reduced white eye patch and reduced crest. The juvenile wood duck resembles the adult female, but is duller, with a less obvious white eye patch, buff streaking on the breast and sides, and a streakier belly. Juvenile males begin to show white on the throat and face from around three months old. Ducklings are dark brown above and yellowish below and on the face, with a dark stripe across the eyes. The male wood duck’s distinctive plumage makes it difficult to confuse with any other duck species. However, the female and juvenile are quite similar in appearance to the female and juvenile mandarin duck (Aix galericulata), which is sometimes present as a feral species within the wood duck’s range. The female wood duck is generally darker and less grey than the female mandarin duck, and has a more distinct eye patch. Although the male mandarin duck is colourful and ornate like the male wood duck, it differs mainly in its white and orange rather than dark black and green head. The calls of the male wood duck include a thin, high, rising and falling whistle, and a ‘burp’ call made during courtship. The female produces a variety of calls, including a loud ‘oo-eek, oo-eek’ when disturbed or taking flight. The wood duck’s wings make a whistling sound in flight. The wood duck is one of only a few ducks with strong claws that allow it to perch in trees. Unlike most ducks, the wood duck nests in tree holes, and on leaving the nest the young may have to leap to the ground from great heights. 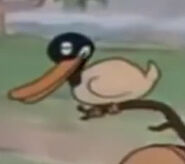