The Parody Wiki
Register
Don't have an account?
Sign In
Advertisement
in: Disney, Aliens, Lilo and Stitch Characters,
and 11 more

Woody, A.K.A. Experiment 507, is an illegal genetic experiment created by Jumba Jookiba and a character in the Lilo & Stitch franchise. He is designed to eat wood at a rapid pace. His one true place is with Mrs. Hasagawa as one of her "cats".

Chloe Cerise, she is currently an 'ohana to Woody

Parker Cerise, he is also one of the 'ohana to Woody 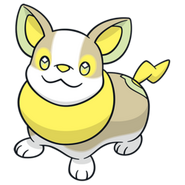 Prof. Cerise's Yamper also one of the 'ohana to Woody

Outside of Lilo and Stitch series, his current 'ohana, a new friends, and also another playmate, were Chloe Cerise, her little brother Parker Cerise, and their Pokémon pet a Prof. Cerise's Pokémon Yamper (from Pokémon series).