The Parody Wiki
Register
Don't have an account?
Sign In
Advertisement
in: Characters, Male Characters, Heroes,
and 11 more

Woofster is a new character of Super Why who first appears in episode 66, "Woofster Finds a Home", the very first episode in Season 2 when Whyatt and the Beanstalk family adopt him.

He is currently the fifth member of Super Readers and he uses dictionary power to aid the others when they do not know a certain word.

Not much information has been given about Puppy. But just like any other puppy he is very playful, happy, and perky. He loves to play with Whyatt and loves him very deeply. Especially when they can go outside to play!

Puppy seems to be empathetic also, when someone feels sad then he tends to feel sad too.

Woofster is a golden retriever with light brown spots randomly placed around his body. His nose is black while his eyes are dark blue. he has thin brown eyebrows and wears a dark blue collar with gold piece attached to it.

The Super Readers discover that Puppy is actually Woofster from the book "Woofster Finds a Home" and he becomes a member of the team at the end of the episode.

With "Dictionary Power" Woofster will use his dictionary to look up words the Super Readers may not understand in order to make the situation for them easier to understand.

Puppy essentially looks the same but with a royal/midnight blue cape with a small orange dictionary hanging from the center. When used, the dictionary grows in size so that Woofster can show the audience. In the syndicatedversion, sparkles were added to his cape to match Princess Presto's outfit.

In his transformed state, Woofster can talk. And he does not have his own Why Flyer. He rides in Super Why's behind him while wearing a helmet as well.

Woofster Finds A Home: Whyatt heads to an adoption for pets and comes by Puppy, in need of a family. They learn he has a tale of his own and accept him into the Super Reader's group. 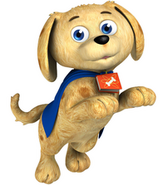 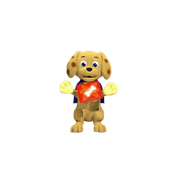