The Parody Wiki
Register
Don't have an account?
Sign In
Advertisement
in: Main Characters, Characters, Females,
and 64 more

WordGirl (whose real name is Becky Botsford) is the main protagonist and heroine of the series of the same name, and is voiced by Dannah Phirman. Her secret identity is a mild-mannered, and witty fifth-grader, but whenever evil arises, she instantly becomes WordGirl by placing her hand to her chest and exclaiming, "Word Up!".

Her trademark insignia consists of a red star imposed on a golden shield. She seems to have a fondness for maroon, as both her WordGirl and Becky forms wear it.

WordGirl is extremely popular in Fair City, which she protects, and there has been much merchandising and celebrating of the heroine. She has even received many (over 200) keys to the city.

WordGirl finds it hard to keep her identities separate, often making slips, but thankfully no one notices. In truth, she does a very bit to disguise her true identity. Her helmet does absolutely nothing to hide her face or her distinctive hairstyle, and Becky is the only other person in town shown with a monkey sidekick. The fact that it's made so obvious to the viewing audience usually adds to the comic element of the series. 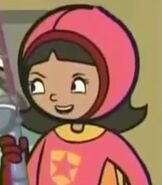 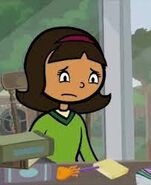