Yami Yugi, known as Dark Yugi in the manga and Japanese versions, and also referred to as the Nameless Pharaoh, is the spirit of Pharaoh Atem that has been sealed in the Millennium Puzzle. He is the main protagonist of the original and second series, along with Yugi Muto. Together with Yugi he holds the title "King of Games" (King of Duelists in Japanese version), by winning in the Duelist Kingdom, Battle City, Grand Championship and Battle City V2 (in GX anime) tournaments. After Yugi Muto solved the Millennium Puzzle, Yami Yugi resided in Yugi's body and would take possession of it when Yugi or his friends were in danger. After Yugi became fully aware of Yami's existence, Yugi could voluntarily give control of his body to the Pharaoh; occasionally before one would give control to the other, they would, as souls in the mind of the one controlling Yugi's body, converse with each other, usually about their options of what to do when in difficult situations. 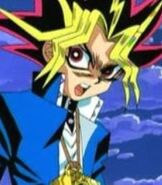 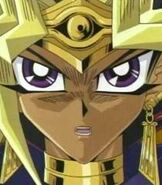 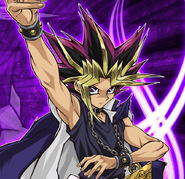 Yami Yugi in YGO Wallpaper 777 episodes
Add a photo to this gallery
Retrieved from "https://parody.fandom.com/wiki/Yami_Yugi?oldid=1666076"
Community content is available under CC-BY-SA unless otherwise noted.