The Parody Wiki
Register
Don't have an account?
Sign In
Advertisement
in: Characters, Animals, Extinct Animals,
and 18 more

Yangchuanosaurus is an extinct genus of metriacanthosaurid theropod dinosaur that lived in China during the Bathonian and Callovian stages of the Middle Jurassic, and was similar in size and appearance to its North American relative, Allosaurus. It hails from the Upper Shaximiao Formation and was the largest predator in a landscape which included the sauropods Mamenchisaurus and Omeisaurus as well as the Stegosaurs Chialingosaurus, Tuojiangosaurus and Chungkingosaurus. It got its name after its discovery site in Yongchuan, in China. 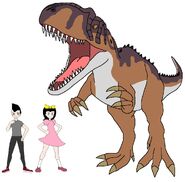