Start a Wiki
Yasha Mousekewitz is Fievel and Tanya's Baby Sister from "An American Tail" and one of the characters in Kids World's Adventures of An American Tail.

As Young Cinderella In Olivirella

As Puppy Lady In Miss Bianca and the Bernard

She is a Puppy

As Baby Melody in The Little Bianca 2: Return to the Sea

She is a infant

She is a Puppy

As Young Anastasia in Oliviastasia

She is a Young Russian Princess

As Paprika in Elmo's Clues!

She is a Baby Sister

As Young Ariel In The Little Mouse 3: Olivia's Beginning (Nixcorr26)

She is a Young Mermaid 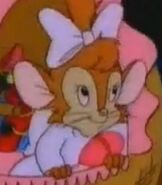 Add a photo to this gallery
Retrieved from "https://parody.fandom.com/wiki/Yasha_Mousekewitz?oldid=1815202"
Community content is available under CC-BY-SA unless otherwise noted.