The Parody Wiki
Register
Don't have an account?
Sign In
Advertisement
in: Characters, Animals, South American Animals,
and 18 more

The yellow-footed tortoise (Chelonoidis denticulatus), also known as the Brazilian giant tortoise, commonly referred to as the Brazilian giant turtle, or more commonly, the big turtle, is a species of tortoise in the family Testudinidae and is closely related to the red-footed tortoise (C. carbonaria). It is found in the Amazon Basin of South America. With an average length of 40 cm (15.75 in) and the largest known specimen at 94 cm (37 in), this is the sixth-largest tortoise species on Earth, after the Galapagos tortoise, the Aldabra tortoise, the African spurred tortoise (Geochelone sulcata, typical size 76 cm (30 in)), the leopard tortoise (Stigmochelys pardalis), and the Asian forest tortoise (Manouria emys emys, typical size 60 cm (23.6 in)). The yellow-footed tortoise is also called the yellow-foot or yellow-legged tortoise, the Brazilian giant tortoise, or South American forest tortoise, as well as local names such as morrocoy, woyamou, or wayamo, or some variation of jabuta. Many of the local names are shared with the similar red-footed tortoise. The carapace (shell top) is a long oval with parallel sides and a high-domed back that is generally flat along the vertebrals with a slight peak near the hind end. There are five vertebral scutes, four pairs of costals, eleven pairs of marginals, no nuchal scute and a large, undivided supracaudal. The front and rear marginals are slightly serrated in front and rear of young yellow-footed tortoises. The carapace is yellowish brown to dark brown or even black at the edges of the scutes. The areola in each scute are pale yellow, orange or light brown and blend into the darker carapace. The plastron (shell bottom) is thick around the edges, and the gulars do not project past the carapace. The plastron is yellow-brown turning nearly black near the seams. The head is relatively small and longer than wide. The upper jaw has three tooth-like points. There are large black eyes with a tympanum behind each eye. The skin of the head and limbs is black with yellow to orange scales on top and around the eye and ear. The forelimbs have five claws, are long and slightly flattened. They are covered with fine, dark scales and slightly overlapping larger scales on front in the same color as the head. The hind limbs are elephant-like with four claws, and are covered in small scales colored like the forelimbs. The tail varies in length by gender and has a row of colored scales on the sides. 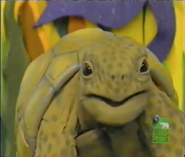