The yellow longnose butterflyfish or forceps butterflyfish (Forcipiger flavissimus) is a species of marine fish in the family Chaetodontidae. It is widespread throughout the tropical waters of the Indo-Pacific area from the eastern coast of Africa to Hawaii, Red Sea included, and is also found in the eastern Pacific Ocean from Baja California to the Revillagigedo Islands and the Galapagos. It is a small fish which grows up to 22 cm in length. This species can also be found in the aquarium trade. 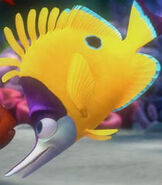 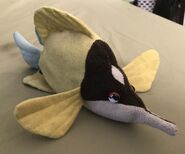 Tanked! (2011-)
Add a photo to this gallery
Retrieved from "https://parody.fandom.com/wiki/Yellow_Longnose_Butterflyfish?oldid=1688555"
Community content is available under CC-BY-SA unless otherwise noted.