The Parody Wiki
Register
Don't have an account?
Sign In
Advertisement
in: Yu-Gi-Oh! 5D's Characters, Males, Handsome Boys,
and 45 more

Yusei has tan skin, an average looking physique, black hair with gold highlights, and royal blue eyes. The upper layer of his hair juts upward while the lower layer arches down. Yusei wears a long-sleeved blue jacket with a high collar and amber gems, over a sleeveless black shirt with a red symbol, and wears gloves below his elbows with an amber gem on them. His lower body consists of black jeans with amber knee pads, a belt with two Deck holsters hidden under his jacket (one for his standard Deck and one for hisTurbo Duel Deck), and calf-high motorcycle boots. After episode 5, he acquires a jagged criminal mark on the left side of his face, which was later covered in episode 116 and episode 117, presumably by makeup. His Mark of the Dragon was a red outline of the tail, which was permanently burned onto his right forearm after the events concluding the Fortune Cup story arc. It is later replaced by the dragon head mark upon his defeat of Rex Goodwin, with Crow Hogan receiving his former mark

Yusei played Roo in The Many Adventures of Yoshi

he's a son of Kanga 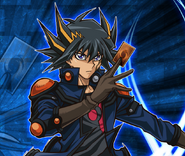 Yusei and His Team Parasites 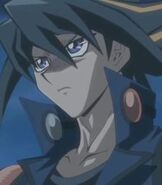 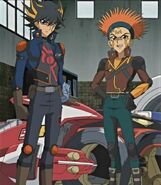 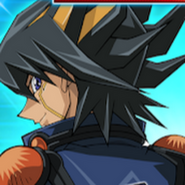 Yoshi as a Pony with Yusei Fudo

Yusei and the other Main Characters 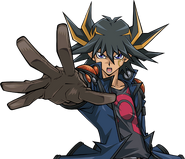 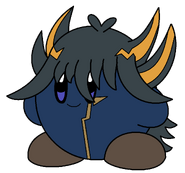 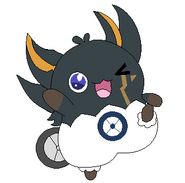 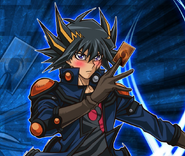 Yusei was fell in love with Honoka Yukishiro Yusei is a Hedgehog

Yusei with Jack and Mega Man

Yusei was he is Similar to Tuff from Kirby Series, Shadow the Hedgehog from Sonic Series, Yami Yugi from Yu-Gi-Oh! Series and Mudkip from Pokemon Series

in 5D's Episode 27 Angela being saying Fusei Yudo after Carly