Yves St. La Roache is a character from The Animal Show.

Like Jacques, Yves has a French accent and a culinary bent. Many of the meals he prepares are ridiculous (like those of the Swedish Chef), such as a marmalade made with oranges, sugar, and gun powder, a large pizza with shoes, car tires, toasters, and rubber duckies, or a piano made entirely of meatballs. In other segments, Yves explains animal's eating habits (such as eating with tusks). Many of his demonstrations ended up with something falling on him, either from his own mistakes or from some omniscent presence. Among the items landing on his head outside his will are a giant boulder, a giraffe's plant dinner, a meatball piano, piles of dirt, cooking utensils and pots, a school of fish, and a horse. 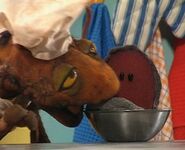 Add a photo to this gallery
Retrieved from "https://parody.fandom.com/wiki/Yves_St._La_Roach?oldid=1989834"
Community content is available under CC-BY-SA unless otherwise noted.