The Parody Wiki
Register
Don't have an account?
Sign In
Advertisement
in: Madeline Characters, Main Characters, Characters,
and 75 more

Yvette is one of the twelve little girls.

Yvette is a little French girl with short bleach blonde (originally copper) hair. Her animated visual's hair has the same shape as that of Madeline Fogg. In the original specials, she had gold hair.

Yvette is snobbish, boastful and self-centered. She is the exactly mean girl, being somewhat of a bully and a what-not (though Emma from My Fair Madeline was worse compared to her.). As revealed in Madeline and the Show-off, she enjoys showing off to the point of being boastful and is rude to the other girls when they get tired of her foolishness. She even encouraged them to act the same. She believes herself to be pretty and feels that nothing in the entire universe could ruin that--even after the girls put red paint into her hairbrush. She is also unenthusiastic of others who disagree with her and puts down others when they get more attention than her. She even tried to flirt with Pepito to get him to take a copy of her self-titled newspaper, "The Daily Yvette." This backfired on Yvette, though, as Pepito hid behind a tree and out of Yvette's way before she had the opportunity to talk to him. Some people have speculated that Yvette only attempted to flirt with Pepito to get under Madeline's skin and irritate her.

She can be vain and bossy at times and enjoys spending her time simply admiring herself in the mirror--occasionally a handheld variant. Like Danielle, she adores fashion, and she is one of the only girls to really admire Sugar Dimples before the others get to know her. 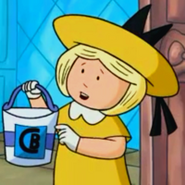