The Parody Wiki
Register
Don't have an account?
Sign In
Advertisement
in: Main Characters, Characters, Male Characters,
and 17 more

Zeg was introduced in the series premiere Blaze of Glory. He was the fourth Monster Machine Blaze met in the Monster Dome, though late at first, made his big entrance by smashing through the wall of his pit. He was also the third Monster Machine Blaze had to rescue after Crusher's Trouble Bubbles carried him away. He got lost in a snowy mountainscape and was rolling out of control in a snowball. Blaze saved him with his Blazing Speed before he fell over a cliff.

Zeg has a very boisterous personality, acting as the “big guy” of the Monster Machines. He is always full of energy and is always active, and is also strong. He tends to often get overexcited at times, especially whenever there’s something new.

Zeg speaks in a low, Hulk-like voice. He uses broken English, omitting linking verbs, and refers to himself in third-person.

According to the Nick Jr site, Zeg is half-monster truck, half-Triceratops. At first, Zeg could have been built look like Triceratops, since it's impossible for a monster truck and a dinosaur to have offspring mainly because dinosaurs are extinct. However, later on, there has been some evidence that Zeg came from an egg, like for example, "Zeg and the Egg" an egg hatched to into a baby truckodactyl. Thus it's further implied that, Monster Machines are born, not built.

He is yellowish-green in color, with parts of turquoise. He dons two horns on his hood, and exhaust pipes that resemble horns on his side. He also has a tail, and tires with a rocky pattern and turquoise rims.

Part monster machine, part triceratops, Zeg is Blaze's best prehistoric pal. Zeg's favorite activities are smashing and bashing. But despite his brute tendencies, inside Zeg is a big softy with a gentle demeanor and a loveable laugh. 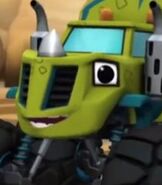