Start a Wiki
Zoe Isabelle Costello (born January 31, 1987 in Andover, Massachusetts) was a cast member on the seasons 1 and 2 of ZOOM.

Now she lives a quiet life in Brooklyn, New York. Growing up in Massachusetts, born to Alexander Steven Costello and Antoinette Marion Costello. She had an older sister named Alexandra Jane Costello, who now works as a homemaker.

Outfits she wore on ZOOM

Zoe wore a plaid t-shirt over a purple one. She wore a Black Shirt over a White top during the "Language Nursery" Credits.

What is Zoe making in Café ZOOM? 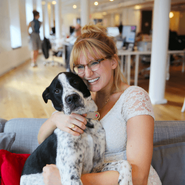 Add a photo to this gallery
Retrieved from "https://parody.fandom.com/wiki/Zoe_Costello?oldid=1733295"
Community content is available under CC-BY-SA unless otherwise noted.